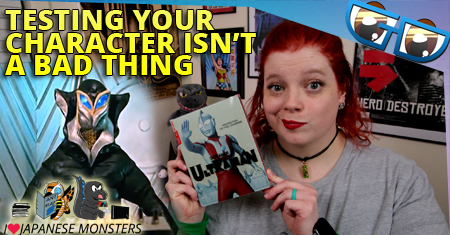 Welcome to the 2nd installment of I Heart Japanese Monsters!

Today on Geek Devotions were talking about Ultraman! Dallas and I have the original series, and we have been going through it. And if you remember, we thoroughly enjoyed the Netflix original anime.

So because of I Heart Japanese monsters month, we decided to include Ultraman!

The episode we are referencing today, a villain called Melafas has come to invade the earth but he’s such a polite alien that he doesn’t want to use force. So he kidnaps the Kid named Satoru that hangs around the SSAP and many times throughout the show asks him if he may have the earth. This kid is offered whole worlds and immortality, and yet he says no. At the end of the episode, Hayata comes up to him and tells him he is proud of him. The kid solemnly goes… I thought I was going to die. You see, this child went through what we would call a trial. He faced a situation where the easiest path was not the right path. And he gained wisdom and grew from this experience with Melafas. He realized that he was quite strong and could do the right thing even if he was scared.

Now I’m guessing that you haven’t ever had an alien kidnap you and ask your permission to invade earth, but we as Christians do face our own trials. Trials that ultimately show our character and our strengths or our weaknesses.

In James it says

“Consider it all joy, my brethren, when you encounter various trials, knowing that the testing of your faith produces endurance. And let endurance have its perfect work, so that you may be perfect and complete, lacking in nothing.”
Jacob (James) 1:2-4 TLV

Going through the situation where the alien was pressuring him to give possession of the earth gave an opportunity for Satoru to grow in character and endurance. We see James telling us to count this as joy. It seems kinda against what we would consider normal to be joyful when things are going on that are stretching us. But what we have to remember during these times is that Happiness is what leaves when there are difficult times. Joy is from God and isn’t dependent on what is going on around us. By choosing joy, choosing to stay in God’s joy even when things are going on in our life is how we build endurance and become better and better at this whole living for God thing.

Question of the week:

What is your favorite alien race?