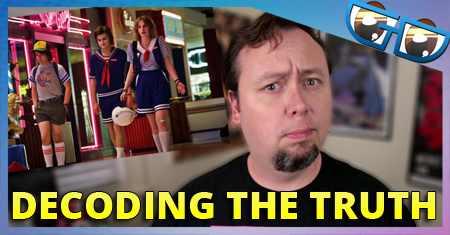 Season 3 of Stranger Things came out last week, and it’s a wild ride. In it Dustin, Steve, and new friend Robin spend a couple of episodes decoding a secret Russian communication. It’s a complicated process as they seek the truth, does seeking God take the same amount of complication? Dallas takes time to look at this question and give some practical advice.


Season 3 of Stranger things is another nostalgic/suspense-filled ride. Leaning into the fears of the cold war in 1985, the season opens with Dustin discovering a secret Russian message over his radio.  Feeling abandoned by his normal party members, he heads off to recruit Steve to help him. Between scooping Ice Cream with his co-worker, Robin, they are able to decode the secret message… but it doesn’t make a lick of sense. Something is missing, and they can’t figure it out. Earlier, Steve mentions that he recognized the music in the background, but he quickly shut down. Little did they realize… that music was the key they needed. That music was the same music played on a Kiddie Ride horse in the mall. Suddenly it all made sense… the Russians were broadcasting from the mall. They went through an extensive, very long, complicated process to decode that message, but in the end, the key was simple. It just took them taking a moment to observe.

Similarly, people are seeking for God in a variety of ways, and they are making it far more complicated than they should. They feel like there is a magic formula that requires them to do so many things to see or hear from God.  But scriptures tell us that God really is not in the big things, rather He’s often found in the smallest things. In 1 Kings 19, we see the prophet Elijah in a place where he’s seeking God. In this chapter, he experiences a variety of significant things, yet God was not in any of them. Instead, God is found in “the sound of a low whisper.” Yes at times, God has been very bombastic in His communication with His people, but often times… He’s speaking very softly. So how do we hear it?

Psalm 46 may be a great clue. It’s a great Psalm speaking of God as our fortress, a place of rest. What’s interesting is that as it goes through and describes who God is and what He’s done, it will insert moments of Selah. Selah is a term that means to pause and reflect. The Psalmist is saying, “Hey, we just describe God and His actions in these last few lines. Take a moment before we continue and really think about them. Put yourself in those moments; ponder the ramifications of those moments. Then towards the end, we get to verse 10

Here we see a key to hear from God, “be still.” Instead of getting lost in the busyness of everything, of rushing around trying to achieve all these “points” with God, just be still and reflect. Reflect on the world around you and how God is revealed through His creation. Open the scriptures and read through each page carefully and purposefully. Take time to stop and pray, being willing to sit even in silence so that you may hear from Him. In every one of those examples, you must simply be still.

Your challenge this week is to take time to be still. To stop, take a few moments, and be still before the Lord.