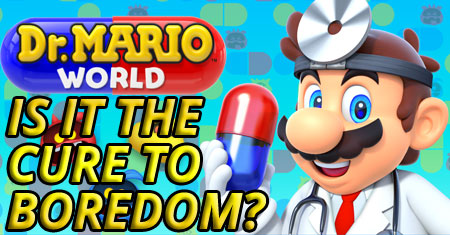 Nintendo’s Dr. Mario World is out, but is it the cure to boredom?

Recently, Nintendo released their latest mobile game, Dr. Mario World, which is available in the Apple Store and Google Play. We haven’t seen a remake of the 1990’s classic since 2001’s Dr. Mario 64. So how is this latest Nintendo mobile game? I will say that to review this I’ve had to work past some very personal nostalgia. I remember playing the original NES version as a kid. I have fond memories of watching one of my Uncles set the difficulty level to 99 and tear through the level faster than Mario with a Super Star running through a field of Goombas. Watching him was like a Padawan watching a Jedi Master. So how did this stack up? Let’s take a look.

The story of this mobile game is pretty simple. There’s a rash of strange viruses spreading across the many kingdoms in Mario’s world, and you need to stop it. Past that there really isn’t much of a story. The game becomes a familiar puzzle game along the lines of other color matchups.

The game starts by giving you Dr. Mario himself as they walk you through the tutorial. What’s interesting is that even after playing 20+ Levels; I’m still experiencing some sort of tutorial. This is actually kind of hopeful to me because often these mobile puzzle games become monotonous. The fact that there seem to be new aspects to the game being brought up gives a sense that I may not become bored quickly.

A new aspect to the Dr. Mario World is the introduction to multiple Doctors. At one point, you’re given the option to choose between Dr. Mario, Dr. Peach, or Dr. Bowser. Each comes with their own unique ability. I do recommend you choose wisely as you won’t be able to switch from that character until you unlock the others later. That said, you’re also able to unlock a variety of “Helpers” who give you different bonuses. 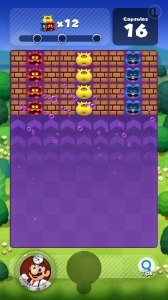 The first several levels of gameplay are pretty simple to play through without much thinking due to their being a tutorial. That said, as you progress, the puzzles do get more complicated. I found myself pleasantly challenged in certain levels in attaining a perfect 3-star win. That said, I wouldn’t say that these levels are too complicated for younger players. The controls are very simple to us, but I do recommend you change your screen time out to be a bit longer than 10 seconds, my personal default. The reason for this is because if you tap the screen to wake your screen from the dim mode, it will cause you to skip an instruction given to you. That alone has made a few bits of gameplay a bit difficult for me simply because I missed an instruction.

The sound and graphics of the game are pretty nice. While much of the music is new, there’s that familiar old school Dr. Mario melody in the background. The sound effects aren’t pitchy and annoying as can be in some games. The colors and designs create an animation that’s lovely to watch but also make it easy to follow the action on the screen.

While you can play through the game without spending money, you do have the option to drop the cash for extra bonus items, lives, etc. This is a typical trope in these mobile games. I personally don’t put money into mobile games, but if you want to be able to purchase extra items, it is an option. Many of these items can be purchased via in-game currency that you earn, but some are locked behind a paywall.

So is Dr. Mario World worth playing? Yeah, it’s a pretty fun game to play if you have some free time available to you. Overall I’d give this game a 4 out of 5.