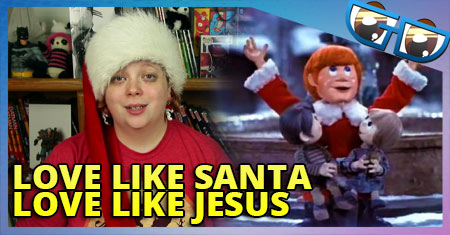 For week 2 of Geekmas 2018 Celeste sat down to watch the 1970 classic, “Santa Claus Is Comin’ To Town!” While the movie as whole was fun, it was the ending monologue that stuck out to Celeste. What was so special about this speech? Watch and Find out or read the article version down below.

The final monologue by Frank Sinatra’s character struck Celeste. He said to the “Children” asking questions about Santa, “Well, most everybody. Oh, he’s not considered an outlaw anymore. But there still are some…”

“Poor, misguided folks. They missed the whole point. Lot’s of unhappiness? Maybe so. But doesn’t Santa take a little bit of that unhappiness away? Doesn’t a smile on Christmas morning scratch out a tear cried on a sadder day? Not much maybe. But what would happen if we all tried to be like Santa and learned to give as only he can give: of ourselves, our talents, our love, and our hearts? Maybe we could all learn Santa’s beautiful lesson, and maybe there would finally be peace on Earth and good will toward men.”

This speech got Celeste thinking because as much as she LOVES Santa Claus and what Santa stands for, there is someone who loves bigger, better, and stronger than Santa ever could or would be able to. No matter which lore about Santa you hold to, be it that he is a man, elf or magic, he’s not the Son of God. He did not die and rise again. But Jesus did die and rise again and is the son of God. And he tells us something similar to the observation made by the postman in the movie.

In John 13:34-35 Jesus is talking to his disciples for one last time. It’s the last supper, and they’ve been eating and celebrating (because it was Passover). Judas has already left, and Jesus tells the remaining 11 disciples this.

See, if Christian’s act with love in everything they do, if they love selflessly, and truly… well we may not quite have peace on Earth, but at least we can be identified as someone who follows the one who brings peace. In this movie, Santa loves people so much that he makes toys, and spreads cheer.
What’s cool is he’s not doing anything out of the ordinary for him. The toys and delivering the toys were in his wheelhouse — something he would naturally do. So the question needs to be asked; what are you doing that spreads the love of God? What is in your hands right now that you can use to help let people know that they are loved.