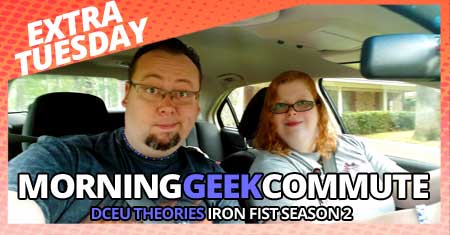 For this week’s Extra Tuesday we do a Morning Geek Commute where we talk about DCEU theories verified by Zack Snyder, Iron Fist, and Season 3 of Geek Devotions!!

Recently, Zack Snyder confirmed which Robin the Joker killed prior to his Batman v Superman: Dawn of Justice film. If you’re not familiar with the discussion, in the film Bruce walks past a display case containing a damaged and graffitied Robin costume. This sight set off a world of theories where fans were attempting to identify which Robin The Joker had killed.

Comic Book purist pondered if it were Jason Todd whom The Joker (and comic fans of the 80’s) had killed off in Batman Issue 428 in 1988. However, the suggested weapon of choice for this Robin through theorist for a bit of a curveball. In the scene, we see a modified bow staff which was a staple weapon for Tim Drake. So which Robin was it?
Richard “Dick” Grayson.

That’s right folks, in this world, it was the first Robin who died! I don’t know about you guys but I’m not sure how I feel about this revelation. Snyder had also confirmed that he had originally planned for Carrie Kelly (Robin in The Dark Knight Returns series) was going to be his next Robin.

What are your thoughts on these revelations? Does it change how you look at the movies? Do you think the Robin in the upcoming Titans series will be the same Robin that the Joker Killed or will it be a different timeline? Leave a comment and let us know!

Netflix has released a new trailer for Marvel’s Iron Fist Season 2! From a brief glance, it appears that they may have heard the cries of fans and reworked some of the fighting sequences of this series. Check it out and let us know your thoughts and let us know if you’re excited for this new season?