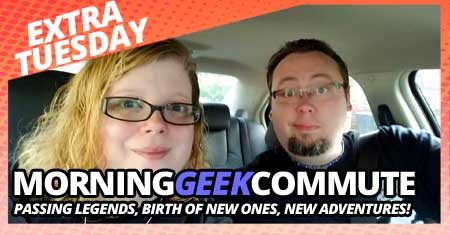 **Disclaimer – the first story of the day about Alan Young was done without doing proper research. Alan had passed back in 2016. We had seen a memorial post on another page and we failed to read it thoroughly and realize this. We apologize for any confusion.***

This week on our Extra Tuesday Morning Geek Commute we talk about the upcoming Solo: A Star Wars Story, Lego Movie 2, new additions to Pokemon Go, the end of Shin Godzilla’s career to make way for a new Toho Monster-verse, Gotham Zero Year, and Thunder Cats Roar! WOW! That’s a lot to fit in before we get to work! Enjoy!

Solo: A Star Wars Story is the newest member of the Star Wars Franchise. Celeste is ridiculously excited about getting to see this particular movie. Another person who is very excited about the upcoming filed is our friend Colby Bryant, VP of Geeks Under Grace, who actually wrote an article called “Han Solo: A Christian Perspective.” It’s a really great article that we recommend you check out!

In more movie news we have a sequel and the cancel of a sequel. Lego has announced the sequel to the smash hit The Lego Movie. This installment is called “The Lego Movie 2: The Second Part.” At the time of the writing of this article, a plot has not been released.

The canceled sequel is sadly the continuation of Shin Godzilla. The very end of the Shin Godzilla left fans with a desire to see more of our favorite rampaging monster. However, Toho has announced that they will not be continuing this storyline in favor of a reboot after their contract with Legendary is over. They are actually planning on doing their own “Monster-verse” using Godzilla as a jumping off point.

Last week we told you that Gotham has announced that the end is nigh. Well, apparently they are ending it with a bang as they are closing it out with their take on the classic “No Man’s Land” storyline and Scott Snyder’s Zero Year! This should be an interesting way to close things out.