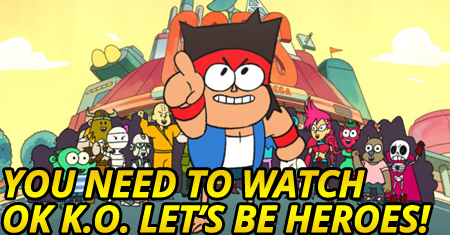 Why You Need to Watch OK K.O. Let’s Be Heroes

For this week’s Devoted Patreon Pick, we are taking a look at OK K.O. Let’s Be Heroes! If you’re unfamiliar with it, it’s a Cartoon Network original series about a young man name K.O. who’s dream in life is to become a Hero! Wait… that’s not right, his dream is to become the GREATEST HERO EVER! That is a distinction that needs to be made. Why you ask. The distinction needs to be made because this young man lives in a world of Heroes.

In this series, his journey to becoming the greatest hero of all time leads him to Gar’s Bodega Hero Supply Shop. There he and his fellow Customer Service employees work and stock the convenience store. While serving the hero community, they often find themselves fighting off the evil Boxman. Lord Boxman wants to shut down the Lakewood Plaza Strip Mall that Gar’s Bodega is located. Through various adventures and humorous experiences, K.O. learns what it means to be a hero while inspiring his fellow heroes around him.

So why do you need to jump on Hulu right now and watch it?

The first thing you need to understand is that this wasn’t a series that popped up overnight as a throwaway series for kids. A lot of work went into the building of this series. K.O.’s origins date back to a short that Cartoon Network did back in the summer of 2013. The animation style was different, but all the elements of our aspiring hero were present. From that short, Cartoon Network recognized that there was some interest in the series, but they didn’t want to rush the project. Instead, they constructed an elaborate plan to develop the story and interest in the property.

That plan included a mobile game (which you can get on Google and Apple) which was based on the original short. From there they created a variety of mini-shorts each done by a different artist. Each short is beautifully done and in one way or another lends itself to the final product of what we now know to be OK K.O. The creators even took on a small group of animation students and split them up into teams to make a series of micro-shorts that also added to the world-building. The purpose of the micro-shorts wasn’t entirely selfish. This project was meant to help the students get a feel of what it’s like to work with a production team. It also helped the students to understand what it’s like to create content for already established characters while also helping them to build a portfolio for post-graduation.

All of these elements came together in August of 2017 with the very first season of OK K.O. The series itself is a hysterical ride of pop culture, movie, video game, and comic book references that come together to form an adventure for K.O. While the show is obviously designed for younger viewers, adult viewers will enjoy sitting down to watch one or two of these 11-minute episodes at a time.

I hope that this short review has given you a taste for this series and has at least piqued your interest. In a world where so much of our content is serious and often times riding an edge that needs not ridden, sometimes we need a break and enjoy something light-hearted and uplifting.