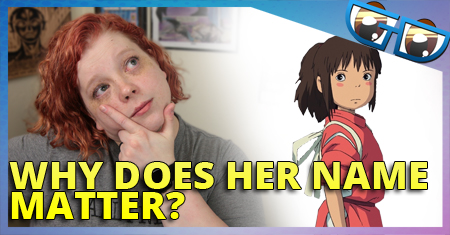 Recently Dallas and I borrowed Spirited Away from the library because I had never seen it before. And I was captivated by the story, the visuals, the everything about this movie. There was one plot point that stuck in my mind out of this movie. Chihiro looks for work from Yubaaba in order to stay and save her parents. When she asks for work from Yubaaba and Yubaaba agrees she tells her… your name is Sen now. And everyone refers to her as Sen. Later she is discussing her plans for saving her parents with Haku and Haku asks her… Do you remember your name? You have to remember your name bc if you don’t and you forget that is how she controls you.”

Devoted Geeks as Christian’s it is sometimes easy to forget our name. We get caught up in the other names the world has for us such as dancer, lawyer, popular, awkward, untrustworthy, weird. Even Geek is a name given to us by others, though I am a self-proclaimed Geek; we have to remember who we are and whose we are.

God the Father has a better name than any other we could even have, and that’s son or daughter. In 1st Peter 2:9, we are given a reminder of who we are.

But you are a chosen race, a royal priesthood, a holy nation, a people for his own possession, that you may proclaim the excellencies of him who called you out of darkness into his marvelous light.
1 Peter 2:9 ESV

So God created man in his own image, in the image of God, he created him; male and female, he created them.
Genesis 1:27 ESV

So when you are down, or life is trying to get you down remember that by accepting Jesus as your Lord and Savior, that you are not what everyone else says you are. You are a son and a daughter of God.