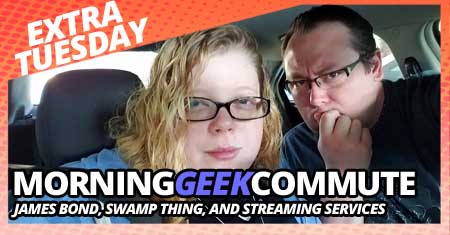 Today on Extra Tuesday, we do another Morning Geek Commute. Not a lot of news this week. But we do have some news on the new James Bond film, Swamp Thing, and we have an interesting discussion on if Streaming Services are necessary.

This week for Extra Tuesday, we talk about some geeky news for our Morning Geek Commute.

Right off the bat, we talk about the new director of the upcoming Bond film.  Director Danny Boyle has been given the honor of continuing the Bond storyline. We made a mistake in our episode when we were discussing what film he had worked on but you may recognize a few of his films; Steve Jobs, Slumdog Millionaire, and 28 Days Later to name a few.  Without a doubt, he’s a talented director and we are excited to see what he does. What are your thoughts on him being named director? Do you think he’ll do a good job?

The next thing we talked is that there are rumors of a Mobil Suit Gundam film. According to the rumors, this particular film will be based on Mobile Suit Gundam 00 ( 機動戦士ガンダム00（ダブルオー). Will this be a good film? With any hope, it’ll at least be better than G-Saviour from 2000.

We also spoke to the upcoming Swamp Thing TV show. They have announced more info about what characters will be in the series. However, for us, the discussion on the show took us another direction. Swamp Thing will be a part of the DC Universe streaming service, meaning you will need to pay for their particular service to get access. So our question here is this….. “Are all of these individual streaming services necessary?” Let us know your thoughts in the comments below.

Want to know our thoughts on other geek topics? Please let us know in a comment below or contact us via social media email us at geekdevotions@gmail.com. Most importantly don’t forget that you are loved!