Detective Comics issue #1 first hit newsstands back in the spring of 1937 and was meant to be a regular publication of hard-hitting, gritty detective stories. Not once in the beginning did anyone suspect that this would become the birthplace of one of the most iconic heroes of history… Batman. Yet in 1939, when issue #27 introduced readers to the Caped Crusader, something magical happened, people, became fascinated with this pointy-eared detective. It wasn’t until issue #35 that the book went from being a myriad of detective stories to becoming the book that championed the stories of the Dark Knight on the cover each and every month.

Flash forward 80 years we experience something fantastic. Issue #1000 is released. This is a pretty historic moment considering that the only other series to reach this height is Action Comics which of course was the birthplace of Superman. So how was this 1000th issue? How did it stack up? Is it worth getting?

Typically in these reviews, I talk about the cover art, story art, and the story itself. This landmark issue, however, poses some problems with this format. Much like the first issues of Detective Comics, this Giant-Size issue is composed of several stories that are not connected. With 10 different covers (10 main variants), 12 different writers, a rockstar list of artists; this truly is a celebration of the World’s Greatest Detective. 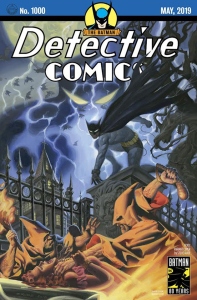 Each of the main covers was done in a different art style and were meant to personify a different era of Batman. I personally picked up the 1930’s variant cover by Steve Rude. This beautifully painted cover features Batman poised to jump a bunch of cultists to rescue a young woman. The other “decade covers” feature various other artists such as Bruce Timm, Frank Miller, Tim Sale, Greg Capullo, and other legends. I honestly wouldn’t mind owning a copy fo each of these decade covers or having a singular poster that featured each one because they are fantastic pieces of art. As with many significant issues, there’s a myriad of special Convention only and Comic Shop specific covers including blanks, titled and untitled, sketches and other iterations. There is an Alex Ross one that pays homage to Issue 24 that is absolutely STUNNING.

Each story in this book is drawn and inked by various other artists. As I read through this, I couldn’t help but smile as each story’s art brought me back to different points in my life. Because of its celebratory intent, the reader is going to be happy and unsatisfied as they read through this issue. Some of the art, I absolutely loved, some of it hated. That said; if you take it as a unique piece that is meant to celebrate the history of Batman, I think the reader will find themselves to be delighted with the overall work.

Going into this issue, I expected one complete story. I was honestly confused, though after a few pages. The opening story, done Scott Snyder, features Batman attempting to figure out the most complicated case he’s ever had and ends with him picking up a book that is supposed to contain all the greatest mysteries ever. The next page begins with an entirely different art style and story. This jarred me for a moment, but then I realized what I was holding. Once you get past that moment and realize you have a collection of stories, this issue becomes very enjoyable. Each story featured Batman in a variety of situations and cases each designed to celebrate certain aspects of who He and the Bat-family are.

So is issue #1000 worth getting? YES Plain and simple. If you’re a Batman fan, then you need to pick up this copy. Between the various art, the stories, this is simply a fantastic celebration of Batman and even the actual book, Detective Comics.  To be honest, with all this honor that this story gave us, I’m curious to see what Tom King (head writer for Batman) plans to do in the next several issues of “Batman.” He is reported saying that he intends to change Batman in a way that will affect the Dark Knight for years to come in issues 85-100 of the book.