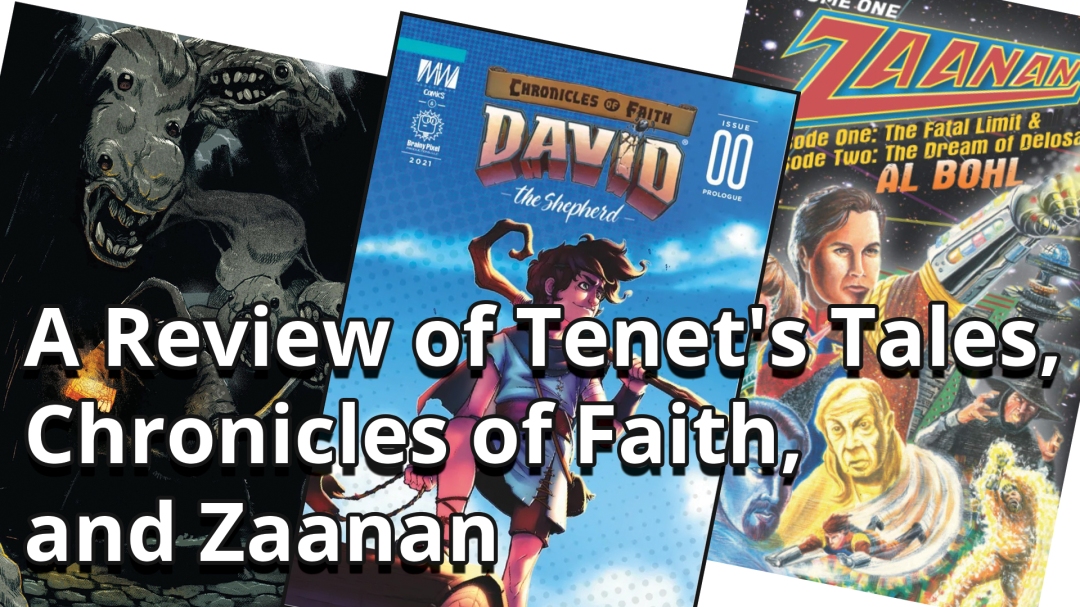 A Review of Tenet’s Tales, Chronicles of Faith, and Zaanan

Hey guys, welcome to B’s Views and Reviews, the podcast that promotes faith-based, family friendly comics and the creators that make them, brought to you by Geek Devotions, a show by devoted geeks devoted to letting you know that you are loved.  I’m Branson, and today we’ll be talking about not one but two faith-based comic books and a novel!!

First, let’s talk about the anti-hero Tenet in his debut adventure in Tenet’s Tales. The story takes place in Acadiana, Louisiana in 1801.  Personally, I always like stories that take place in my home state.  Growing up, most of my favorite superheroes were in New York City, so to have someone close to home is always a treat.

The story has very much a “Princess and the Frog” meets “Spawn” vibe.  The Louisiana setting and magical references make me think back to the machinations of Dr. Facilier. Spawn comes into the picture in that Tenet is a former fallen angel who has seen the light and uses his powers to stop a demon from terrorizing a Louisiana sugarcane farmer.  I was never a huge Spawn fan growing up, but this concept of a warrior meant for evil turning good had always intrigued me about the character.  Tenet follows that same road.

The title page reads “Outcast from Heaven, Hated by Hell, Tenet is a fallen angel bent on protecting human-kind.  He’s immortal, He’s damned.  He has nothing to lose.”  This sets the tone for the story.  Tenet comes across as the kind of guy that you never really want to need his kind of help, but if you do, he’s the best of his kind to get.  We also see this in the distrust of the sugarcane farmer who initially wants nothing to do with Tenet.  However, we also see a glimmer of redemption in that at the end of the story, Tenet hands the sugarcane farmer a Bible.

One of the things I like most about this book is that it is unapologetically Christian.  So far, the books I’ve reviewed have had positive messages, or they paint Christians in their stories as the “good guys,” instead of the villains.  But this book takes it a step farther.  These are demons, actual minions of Satan.  Tenet is a former angel from Heaven.  He quotes Scripture as he fights.  Even the magical items that he uses have Scriptural overtones in angelic powers and “first fruits” being offered as a sacrifice.  It teaches Scripture and the Gospel without being preachy.

The artwork utilizes color to set mood.  Throughout most of Tenet’s time in the swamp fighting the demon, there are a lot of shades of green.  That works, in that it’s in a swamp.  But also, it reminds me of all those villains in the classic Disney movies.  Have you noticed that almost every time magic is used for evil purposes in Disney movies, the color of the energy is green?  So having a former angel surrounded by eerie shades of green gives me a sense that something ominous and evil is lurking about.

Lighting also plays a part in setting the mood at the end.  While Tenet is giving the sugarcane farmer a Bible, and also giving him hope, the sun is rising on the sugarcane farm.  What was first deep blues and eerie greens has now transitioned into muted yellows and light browns.  It’s almost as if hope is breaking with the dawn.  Even Tenet’s facial expressions are less severe.  It does a really great job of telling you as the reader what you’re supposed to feel without spelling it out in the dialogue.

As far as content, you really can’t get better than this.  I would let my 4 year old read this book.  The monsters are scary enough to know that they’re monsters, but they’re not necessarily the stuff of nightmares.  It’s certainly not a happy, peppy, book, but it’s exactly the kind of entertaining yet child-safe story that made me want to start this podcast.  If you have a reader in the house who likes anti-heroes and darker stories, this is one they can get into without having to worry about it negatively influencing thought.  But as always, that’s up to you.

Tenet’s Tales is written by Brannon Hollinsworth with art by Mengo Fedorov and Rooster Ema and is published by Brainy Pixel Productions.  You can get your copy at brainypixel.com/tenets-tales.

The second comic book I would like to take a look at is Chronicles of Faith. Okay, I know I get really excited about comic books.  It doesn’t take much to impress me when it comes to the medium.  But this one…this one blew my mind.  Sequential art storytelling at its finest.  And it paints the story in such a way that it brings a newfound appreciation for stories that I have heard since I was a little boy.  Reading this book made me feel like a kid again.  I think I was actually starry eyed reading it at one point.

The story is King David recounting the adventures of his life to a very young Prince Solomon.  It’s basically Father-Son storytime, but Daddy’s stories are about heroic adventures he actually lived.  We get a small preview of the battle with Goliath, but young Solomon quickly gets bored.  Having heard this story already, he wants to hear his father’s WHOLE story, including his battles with ferocious beasts, leading armies of men, and eventually becoming a king.  This is the framework for the first issue, where David recounts a time that he saved a sheep from a bear.

The entire story is a nod to Jesus calling himself the Good Shepherd.  We see David ask the sheep for his obedience, warn him what happens if he doesn’t.  We see David leave 99 safe sheep to save the wayward one.  We see David tell a huge bear “Ignore the sheep!  Chase me!”  David even says at one point “You know my voice.  Listen to me.”  I wonder if this is the kind of image Jesus had in his mind when he told this parable. We also see the first time David uses a slingshot to kill a beast.  It’s a neat foretelling of what will happen when he faces Goliath.

The artwork of the story is absolutely amazing.  The artstyle more cartoony than realistic, but it gives it a Saturday morning adventure type feel.  Each page has motion in it, as though the page is organic and alive.  It’s not simple boxes on a page.  The art leaps out at you and grabs your attention. The times that David prays to God are especially neat.  The background is a simple color, and the words of his prayers have a very calligraphic font that reminds me of incense rising from an altar.  Not to mention that many of the prayers are actually Psalms that David had written.

As was mentioned with Tenet’s Tales, this work is unapologetically Christian, but not in a preachy sort of way.  I was very entertained by the story, and the prayers and faith elements fit seamlessly into the story.  I was reminded of the truths of Scripture without feeling like I had just sat through a sermon.  I was eager to see what would happen next in the story and was actually disappointed when I reached the end.

As far as content goes, once again, it’s something for everyone.  I’d let my four year old read this, but that doesn’t mean that it’s childish.  It has suspense and action that keeps my adult mind engaged.  I can even connect with David’s fatherly patience as he tries to tell his stories through Young Solomon’s incessant questions.  This is the very embodiment of “family friendly.”  But as always, that decision is up to you.

Chronicles of Faith is a joint project by Brainy Pixel and Mercy Ways Comics.  The story and art are done by Ivan Anaya, with Flats, lettering and design done by Sofia Flores B.  You can get a copy of Chronicles of Faith at brainypixel.com/chronicles-of-faith and also at mercyways.com in their store.

Lastly, I’d like to talk about a sci-fi thriller called Zaanan.

Zaanan is written and drawn by an author/artist local to Shreveport, Al Bohl.  Volume 1 is a combination of two different stories: Episode 1: The Fatal Limit and Episode 2: The Dream of Delosar.  Zaanan is sci-fi space thriller with the hero living in a dystopian future.  The story has elements of Terminator, Space Ghost, and Left Behind.  This is more a cosmic hero than a superhero in the traditional sense.  In Zaanan, society has been taken over by an artificial intelligence called Sphere, a supercomputer that mysteriously appears after a cataclysmic event.  Zaanan, a Talgent Warrior, is part of a peace-keeping force.  He has special power bands that give him abilities like flight, laser projections, among others.

Sphere has set itself up as the ultimate authority in this new society.  There is no marriage, only reproduction.  People over the age of 55 are given a “sleep injection” where their bodies can be preserved for organ donation.  Any thought that views Sphere in a negative light is called “alien thought” and quickly punished.

Zaanan battles against rebel forces and finds himself in a secret colony in the Fatal Limit.  This secret colony is not only thriving in a zone thought to be deadly to humans, but they also have elderly in their community.  They nurse Zaanan back to health and tell him about the Good News of Jesus Christ.  They give him a stone that, when held and asked a question, will respond with Scripture.  He returns to his home and is shocked by the comparison of his own world with that of those who follow Christ.

Zaanan is high-octane action.  He’s always fighting someone, defending someone, or trying to pull himself out of intense situations.  Zaanan teams up with another Talgent Warrior named Flara, and the two go on many action-packed adventures.  Also, not every faction opposed to Sphere is an ally. Zaanan often finds himself fighting against enemies from without and within.

All current volumes are available on Amazon.  You can also find Al Bohl at his website at albohl.com and on Facebook.

Thanks for tuning, guys. If you have a comic book that you would like me to review on the podcast, please email it to me at branson.boykin@gmail.com. Until next time, stay devoted.