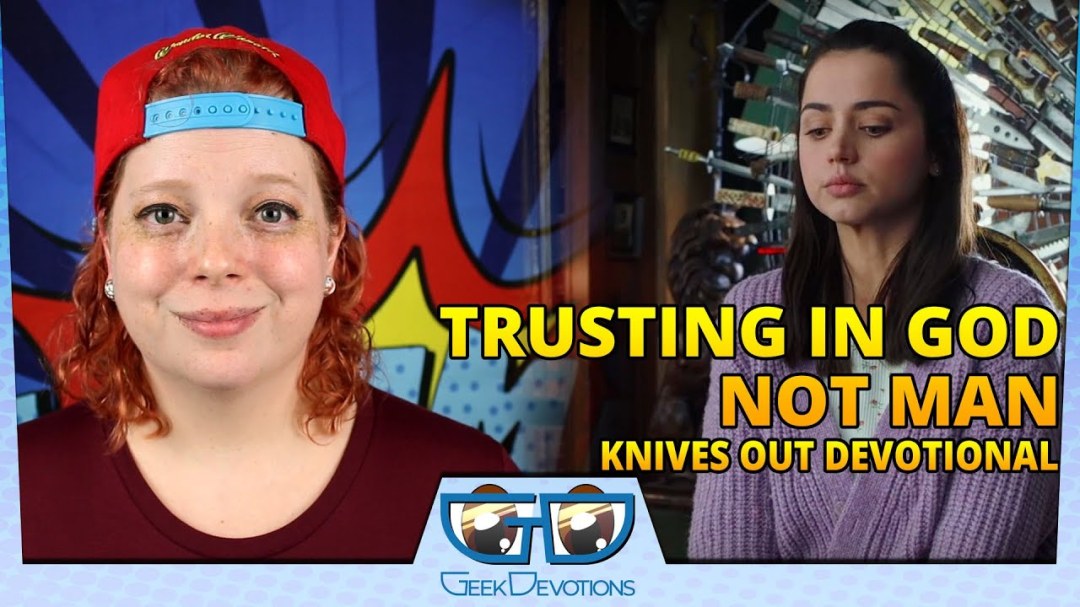 Trusting God Over the Lies of the Enemy | Knives Out Devotional

As we continue “Who Dunn It Month” Celeste takes a look the movie, Knives Out. Here the main character finds herself in terrible situation where she is being manipulated into believing she has killed her Boss. With the stress building she struggles to see the truth. In our own lives, we may find ourselves in a terrible situation where the enemy may use our very friends make things worse than they really are. We may find ourselves struggling to trust in the voice of God over our very friends….

So this week’s “Who Dunn It” movie is “Knives Out” which is honestly the movie that sparked the idea in our heads to do this month. The movie is a classic who dunn it with a phenomenal cast of actors. It also does a good job of making you think that you know what’s going on when you don’t.

So here is the spoiler warning.

In Knives Out you meet Marta, a nurse for an older author who has disinherited his entire family. He makes the mistake of telling this to his grandson who is just enough of a jerk to actually kill his grandfather. The grandson, Ransom, sneaks up to the grandfather’s room and switches two medications meaning that the nurse Marta will take the fall for ” accidentally” killing his grandfather. Things go sideways and his grandfather ends up dead but not the way that one would think. See Marta was set to inherit everything that ransom had lost. So he needed her to be guilty of the murder. He ends up “working with Marta” to try and “keep her from prison.” In the end, all he is doing nothing other than making Marta look very suspicious and guilty. Even telling her that she is guilty but it’s doesn’t matter.

If we take a look at the book of Job, we see a similar story going on. Job was a godly man, whom God permitted the Devil to tempt, attack, and generally make Job’s life miserable. All to try and get Job to curse God. Job went through things that would have broken a lesser man, he lost his family, he lost his land, crops, and eventually his health. Job even had his friends telling him he needed to just curse God and die. Job never did, because he trusted that God was going to take care of him. In the end, he did.

Now our story lines up with Job’s friends. They thought they were helping Job, they thought they were doing what was best for him, but I kinda wonder if they just were tired of hearing about Job’s issues and we’re really looking out for what was best for them? If Job cursed God and died it would be sad of course, but, then they could move on. Not have to see him and think about all the terrible things. Ransom thought he was doing what was right… In his own eyes. And he led Marta away from what should have happened, which would have been, her talking to the police and telling them what happened. Later the truth would have been confirmed when the toxicology report came out proving her innocence. Sadly, she listened to him because he came to her like he was a friend. This, of course, is a betrayal of what a friend is and should be. Job’s friends betrayed what they should be even if they weren’t motivated by their means.