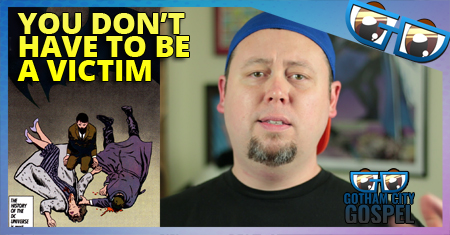 Do you have a choice to be a Hero or a Victim? – Gotham City Gospel Devotional


This week on Geek Devotions, we begin our Gotham City Gospel Series! This is done in partnership with The Healing Place School of Ministry. All month long we are doing devotionals based on the Caped Crusader. Dallas and Celeste will be bookending this month.  Today, Dallas talks about the origins of Batman.

Many are very familiar with the tragic origins of Batman. If you’re not, here’s a quick recap. One night after leaving a movie Bruce’s family decides to cut through an alley where they were confronted by a person attempting to rob them. Amid the incident, Bruce’s parents were sadly murdered in front of him.  This event left Bruce with having to make a choice.

This brings us to the main crux of this devotional… many of us have been through some sort of tragedy. It may not have been the loss of our loved ones, but still, you may have gone through some kind of tragic. For some, they allow those moments to dictate their actions, and they go on living with what many call a “victim mentality.” Sometimes that mentality causes them to act in a manner akin to depression, live a life of fear, live a life where they are continually being a victimized, or simply be very mean and bitter towards others in an attempt to keep people at arm’s length. On the flip side, people can choose to do something, use their pain to spur them to do something different.

In this week’s devotional Dallas presented two different individuals from the scriptures who suffered tragedy and had to choose a path. One was Gomer found the book of Hosea. Gomer was a prostitute that God had commanded the prophet to marry. Even though she was loved and cared for; she would often run back to her former life as a slave. Something tragic happened in her life, and she chose to live a victim mentality. Her victim mentality caused her not to trust in her husband, caused her to continue to run back to the abuse she suffered.

The other individual was Joseph, found in Genesis 37-50. Joseph was sold into slavery by his brothers, thrown into prison under false accusations, then forgotten about for 2 years! He was a man who had every right to be angry and bitter, he had every right to allow himself to live as a victim. But instead, he chose to serve the Lord, to allow what happened to him to spur him to do something different. He went on to save a nation!

Now, this is not to say that choosing not to live with a victim mentality is easy. It takes hard work, it takes moments of doubt that you push through. It takes clinging to Jesus. Don’t let your past keep you from doing something great, use it to spring you forward!

2 thoughts on “Do you have a choice to be a Hero or a Victim? – Gotham City Gospel Devotional”