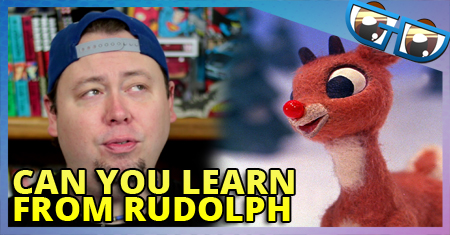 It is officially Geekmas 2018! This week Dallas takes a look at the 1964 classic Rudolph the Red-Nosed Reindeer! What can we learn from this classic story about a bullied Reindeer who saves Christmas? Watch and fight out!

The 1939 Rudolph, the Red-Nosed Reindeer, has been a staple Christmas story for families. Recently, certain publications have taken shots at the story, specifically the 1964 animation, saying that it promotes bullying and other negative themes.  Some have already chosen to throw it out, but is there something to learn from Rudolph the Red-Nosed Reindeer?

The original author of the story, Robert May, wrote this story, in part off of some personal events in his life. As a young man, he was picked on and bullied for being so much smaller than his classmates. Not being allowed to do any reindeer games was a real thing for him. He quickly could have taken on that identity and allowed it to hold him back. But he didn’t. Like Rudolph, he made something of himself. He didn’t let circumstances to stand between him and what he felt he needed to do.

In our devotion this week, Dallas points us to the story of Moses found in Exodus. Moses was born from a people who were shunned. He was raised in the house of his enemies, grew to believe that he was one of them. Yet when he discovered the truth of who he was, he realized that he needed to leave. He was a misfit through and through. He easily could have allowed the identity of a misfit stand between him and what God had for him. YET he did not.

Moses went on to lead the people of God out of bondage. He went on to write out the Pentateuch, first 5 books of the Old Testament. Like Rudolph, there were things that ONLY Moses could do because God had uniquely gifted Moses to do so.

Wherever you are in life today, we want you to know this;  you have qualities that are unique to you. God has something extraordinary for you to accomplish. If you walk in God’s grace, in his love, and in his plan for you; you will find your purpose.

The question of the Week: What’s your favorite Christmas film?

We want to give a very special thank you to the Devoted Patreon Geeks who help to support Geek Devotions on a monthly basis:
Francisco Ruiz
Jonathan Gilbert
Adam Arciniega
Cody McGurk
Erin Straus